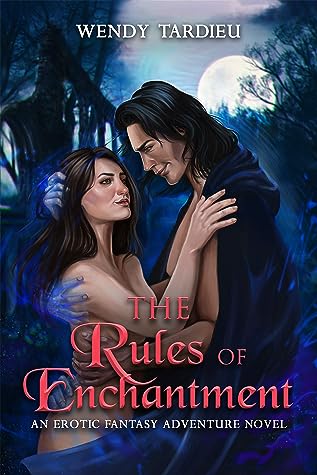 When a sorcerer and a scribe team up to fulfill an ancient prophecy, the fate of the world is in their hands.
In the mythical kingdom of Salyndria, an exiled sorcerer named Leith plots to overthrow the restrictions placed on the use of magic by the Academy. Suspecting the worst, the Academy sends a beautiful young scribe, Kyler, to be his apprentice and act as an unwitting spy.
Leith tries to drive her away by proving his reputation as a vicious and unforgiving master, but he soon discovers his new pupil is far more useful than she appears. As her charms and magical abilities become all too tempting for him to resist, the two join forces to fulfill a hidden prophecy that will grant them incredible power.
Together, the sorcerer and the scribe will change Salandria's history forever.
Their story is equally sinister and sensual, a romantic dark fantasy adventure full of suspense and surprises.
Fans of Defended by Darkness by Terry Bolryder, A Torn Paige by L. Rose, Innocence by Dean Koontz, and The Vine Witch by Luanne G. Smith will love his fantasy romance.

She spent a lifetime never feeling worthy enough to take anything without an invitation.

~The Rules of Enchantment
Writing novellas is no easy task. Authors have to take into consideration pacing, character development, and world-building all in a short period of time. In my opinion, it's an art form that often comes across as missing the mark. In fact, writing shorter stories seems almost more challenging than composing longer novels because audiences only get to spend a minimal amount of time with the characters, which results in restrictions in time available to fall in love with characters and see them grow. To woo an audience within these tight limitations poses an intimidating challenge. Taking these shortcomings into consideration, my experience is that novellas work for a few specific genres like horror, but in other areas, things always tend to fall flat. This has been especially true for my fantasy and romance ventures, and to find that the two genres had been combined in less than 150 pages intrigued and excited me -- I couldn't wait to find out if it could be pulled off this time. In short, I was pleasantly surprised. I truly enjoyed The Rules of Enchantment and would gladly read more. I admittedly started this reading journey off skeptically due to my wariness of how the story would be carried out, but I finished the book feeling satisfied. The author made her work comprehensive enough and tied up all I hoped she would, and Tardieu did it all with welcomed but unforeseen revelations and well-concocted plot points. All in all, I found a lot to like and gush about.
To begin, the fantasy world Tardieu formulated was both rich and elusive. What needed to be explained was, particularly in terms of the magic system, while the rest allowed the mind to wander and piece together the compelling fabric of this realm. Personally, I preferred this style of writing, feeling as though I had exactly what I needed to in order to finish this novella with substantial understanding. Those who like a larger world with more in-depth explanations and analyses may feel robbed, but I appreciate what the author did, especially considering how much time she had to do it. The Orders felt fleshed out enough, and I was compelled by their individual specialties. People's magic could be either deadly or luminous, and their holders each had personality traits that went with them. I was also a huge fan of the older world filled with medieval vibes.
The setting was truly rich. Leith's domain of Solemn Woods was atmospheric, coming across as a character in and of itself. The generous depictions of ominous lighting, dead forestry, howling winds, and inherently dark nature drew me in. It was the surroundings that added a distinct bleakness, setting the stage for the characters' plight and instilling in me a sense of impending unrest. I loved the heaviness of the woods and the spectres trapped there, too. It reminded me of the home in Crimson Peak - desolate, lonely, and begging for blood. I felt cold and claustrophobic just thinking about walking one of the inky paths to Leith's abode, and the observatory itself bred many of the same feelings. While I work best at night, I crave the light, which felt stifled in his domain. The lack of illumination, chill of ever-present stone, and abandoned nature of the structure continued to build the backdrop of the story, which leads me to the opinion that Tardieu is a highly capable writer.
Romance, especially erotica, gets a bad reputation for being trashy. The genre gets no honors for being well written as people tend to think there is a single bottom line - sexy, steamy times. I hate this assertion even though there certainly are some romance stories that are not as poetic or readable as others. However, authors like Tardieu are fabulous examples of what is possible in the romance genre. She proves that novellas are capable of being fleshed out, comprehensive, and fulfilling stories. From page one, I was drawn in and ready to see where she would take me. Sadly, I cannot say the same for many other fantasy or romance novellas. She has a way with words, and you can tell that she loves her craft.
In terms of addressing criticisms, there are a couple I would like to hit on. I completely respect everyone's reviews for any and all stories but still hope to offer my take on others' appraisals in order to explore additional perspectives:
Overall, I thoroughly enjoyed Tardieu's work. I loved Kyler's world and the time I spent in it, and you can bet that I would happily return for more. I never thought a novella-length story would leave me so content with how it wrapped up or paced itself, but I'm glad there is a first for everything.

Peter Green and the Unliving Academy: This Book is Full of Dead People by Angelina Allsop

March 21, 2021
Reviewer:  The Banned Bibliophile Received:  Physical Copy from Publisher Release Date:  November  2018 Moons:  4/5 Goodreads Summary: Fourteen-year-old Peter Green can't remember how he died. All he has are his pajamas, a silk tie, and a one-way bus ticket to Mrs. Battisworth's Academy and Haven for Unliving Boys and Girls, a strange and spooky school for dead orphans like himself. But that's all he needs: the Unliving Academy has everything, from vampires in the hallways, to monsters in the cafeteria, to ghosts in the basement. And that's just the teachers; the students are  far stranger. As Pete learns to fit in with his new supernatural schoolmates, he starts to discover his own uniquely undead abilities, and even begins enjoying his life after death...but he just can't shake the feeling that he's forgotten something (or somebody!) important. Somebody he left behind in the land of the living. Somebody he loved very much. Somebody who's in terrible dang
Post a Comment
Read more