Peter Green and the Unliving Academy: This Book is Full of Dead People by Angelina Allsop 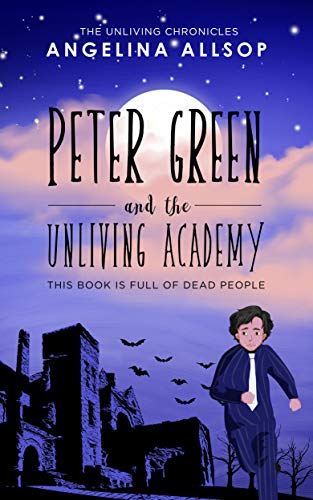 Fourteen-year-old Peter Green can't remember how he died.All he has are his pajamas, a silk tie, and a one-way bus ticket to Mrs. Battisworth's Academy and Haven for Unliving Boys and Girls, a strange and spooky school for dead orphans like himself. But that's all he needs: the Unliving Academy has everything, from vampires in the hallways, to monsters in the cafeteria, to ghosts in the basement.And that's just the teachers; the students are far stranger.As Pete learns to fit in with his new supernatural schoolmates, he starts to discover his own uniquely undead abilities, and even begins enjoying his life after death...but he just can't shake the feeling that he's forgotten something (or somebody!) important.Somebody he left behind in the land of the living.Somebody he loved very much.Somebody who's in terrible danger.Peter Green and the Unliving Academy is the captivating first installment of Angelina Allsop's Unliving series of young adult fantasy novels. If you like reading about fun-filled adventures, fully realized new worlds, and the most unlikely of heroes, you're sure to love Allsop's spirited coming-of-age tale.

As soon as I started to read Peter Green and the Unliving Academy, I had a sudden feeling of nostalgia. In my late middle grade / early YA days, I was absolutely fascinated by books that depict fantastical worlds and children uncovering their true abilities. And for some reason, this book reminded me of Victoria Forester's The Girl Who Could Fly. I was absolutely obsessed with Forester's book when I originally got my hands on it, and all of those amazing memories came rushing back as I dived into Angelina Allsop's novel. It's hard to put my finger on it, but I think it was the atmosphere and characters of Peter Green that pulled forth all those memories of wonderment and curiosity that are tied so heavily to The Girl Who Could Fly. Just like The Girl Who Could Fly, Allsop's novel allows you to follow a young individual's journey to discover who they truly are through wonderful adventures and utilization of strange and otherworldly abilities.
Allsop's book has an interesting plot -- a young man dies and suddenly has to navigate the afterlife. He soon discovers that school doesn't end in death and that the world of the unliving is filled with magic and mystery. Interestingly, children who die have their memories temporarily locked away. Peter struggles with this withholding of information since he is plagued by a nagging feeling that he's forgotten about someone important. Thus, he begins his journey of self-discovery with the help of his newfound friends. They must navigate the dangerous halls of Mrs. Battisworth's Academy and Haven for Unliving Boys and Girls as well as discover what Peter has forgotten.
Many compare this book to Harry Potter, and I can definitely see the resemblance, particularly with the oddities of Hogwarts and the academy. The two settings have similar vibes -- monsters lurking in the hallways, all manner of magic and mayhem, and a cast of characters you're sure to fall in love with. I also get Charlie Bone vibes from this book (this was yet another series I loved growing up, so if you're familiar with Charlie Bone, then you'll enjoy Peter Green). I believe the only complaint I have is the somewhat business of the story....the plot does jump around quite a bit...almost like a plethora of mini-quests that eventually build-up to the big payoff. The story also felt more like it would resonate with a middle-grade audience. This does not detract from the story but rather fits more so into the whimsical nature of middle grade.
Overall, I enjoyed the story. To me, I believe the author's writing style progressed as the story unfolded. The beginning was a bit bumpy, but I was fully enraptured by the end of the novel. As soon as that ending scene hit I knew I had to find out what would be in store next for Peter and his friend. However, I was disappointed to find out a second book doesn't exist yet...but I hope this changes in the near future.
Link to the Book:
Peter Green and the Unliving Academy - Angelina Allsop
Link to the Publisher's Website:
https://www.tckpublishing.com/
Visit the Author's Website:
https://thetravelingauthor.com/

December 20, 2020
Reviewer: The Banned Bibliophile Received: Physical Copy from Publisher Release Date: August 2020 Moons: 4/5 Goodreads Summary: When a sorcerer and a scribe team up to fulfill an ancient prophecy, the fate of the world is in their hands. In the mythical kingdom of Salyndria, an exiled sorcerer named Leith plots to overthrow the restrictions placed on the use of magic by the Academy. Suspecting the worst, the Academy sends a beautiful young scribe, Kyler, to be his apprentice and act as an unwitting spy. Leith tries to drive her away by proving his reputation as a vicious and unforgiving master, but he soon discovers his new pupil is far more useful than she appears. As her charms and magical abilities become all too tempting for him to resist, the two join forces to fulfill a hidden prophecy that will grant them incredible power.  Together, the sorcerer and the scribe will change Salandria's history forever. Their story is equally sinister and sensual, a romantic dark fantasy adven
Post a Comment
Read more